We use our own and third-party cookies to make our website work safely and personalize its content. Likewise, we use cookies to measure and obtain data on your navigation and to adjust advertising to your tastes and preferences. Press the "Accept all" button to confirm that you have read and accepted the information presented. To manage or disable these cookies, click on "Configuration". For more information see our cookies policy.
Modify cookies
Technical and functional Always active
This website uses its own Cookies to collect information in order to improve our services. If you continue browsing, you accept their installation. The user has the possibility of configuring his browser, being able, if he so wishes, to prevent them from being installed on his hard drive, although he must bear in mind that such action may cause difficulties in navigating the website.
Analytics and personalization
They allow the monitoring and analysis of the behavior of the users of this website. The information collected through this type of cookies is used to measure the activity of the web for the elaboration of user navigation profiles in order to introduce improvements based on the analysis of the usage data made by the users of the service. They allow us to save the user's preference information to improve the quality of our services and to offer a better experience through recommended products.
Marketing and advertising
These cookies are used to store information about the preferences and personal choices of the user through the continuous observation of their browsing habits. Thanks to them, we can know the browsing habits on the website and display advertising related to the user's browsing profile.

The Romanesque represents one of the greatest moments of the history of Catalan art both because of the crucial importance of some monuments, internationally recognized, and also because of the fact that in the history and in the imaginary of Catalonia it has almost mystical connotations associated with the political and national origins of the county. The concepts of Catalonia and Catalan became popular during the 11th and 12th centuries, when the first Catalan writings began to be produced. As for art, these centuries constitute the so-called Romanesque. 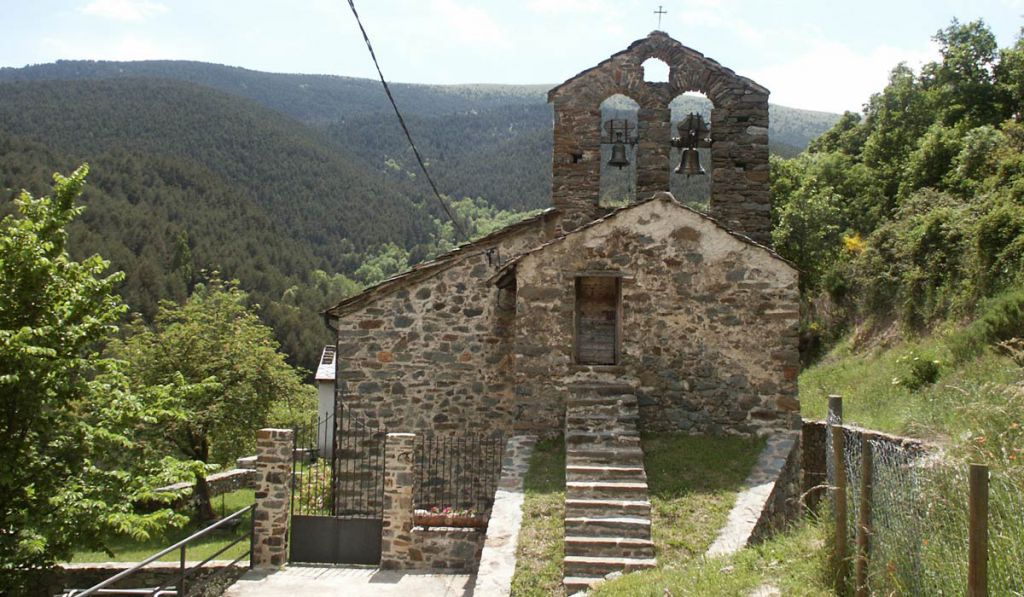 Church of St. Martí: Former Romanesque church that was demolished by a French invasion and rebuilt and enlarged at the end of the 18th century,.

Church of St. Marcel de Planès: Dated back in the 11th century, this church is formed by a unique rectangular nave, covered by a barrel vault and reinforced by a horseshoe-shaped apse inside and semi-circular outside. It has a belfry. This small church is a typical example of the Romanesque rural architecture.
Church of St. Vicenç de Planoles: It belongs to the Lombard architecture of the 11th century, although due to its rusticity it could be dated to the 12th century. Nowadays, there is a small porch atrium. As for the tower’s belfry, it was built in the 19th century, breaking out the style of the rest of the complex.

Church of St. Jaume: Romanesque church from the 12th century. It stands out for its porch, made up by six arches that rest on five blue marble columns. It is one of the best examples of the well-preserved Romanesque Catalan porches until today. During the fifteenth and seventeenth centuries, the original building suffered some modifications such as the enlargement of the central nave with two square chapels; the construction of the vestry with chapel and the building of a tower belfry crowned by a small bell gable.

Church of St. Sadurní de Fustanyà: In the southern façade, there is the entrance door that stands out for its decoration and distribution of the ironwork, quite common in the 11th and 12th centuries. Remnants of a medieval graveyard and ceramic fragments such as the small black clay pot with mouth were found next to a tomb. They probably date from the end of the 11thcentury or beginning of the 12th century.

Church of St. Mary: The original Romanesque church was demolished in 1936 and it was replaced by a modern temple designed by Josep Danés. Inside the building, there is a reproduction of the famous Baldachin of Ribes, one of the best panel paintings of the Catalan 12th century. From the original Romanesque church only three apses are preserved and they are used as side chapels.
St. Pere Castle: it is a structure known as “the tower”, which is the tallest and best preserved part of the castle. It has a minimum of three visible floors, some windows and loopholes.
Segura Castle: dated from the 13th century, there is still part of the eastern wall, a piece of the northern end walls and a big cistern protected by a large carved stone. Inside the castle, the barrel vault roof and the original plaster or stucco walls are still visible.

Church of Sant Cristòfol de Ventolà: The earliest references date from the 12th century. The belfry, with pointed windows, was built later. It has been recently restored and a modern porch with an old structure added.

Church of Sant Feliu de Bruguera: Dated from the 12th century, it suffered a big transformation in the 18th century. From the original church, only a part of the apse without decoration and a part of the belfry are still preserved. Although it is bricked up, the arched portal is still visible.

Chapel of Verge del Carme: It is restored.

Church of St. Cristòfol de Toses: Magnificent Romanesque edifice from the 11th century. The most notable elements of the complex are the ornamental ironwork of the door, the decorated belfry with Lombard arching and the Romanesque inside paintings. A reproduction of the original works can be seen in the MNAC (Catalonia National Art Museum).
Church of St. Víctor de Dòrria: In November 1997, due to a restoration project in the church, some Romanesque mural paintings were discovered. These original frescos are from the 12th century and they are the only ones you can find in the Ripollès area.